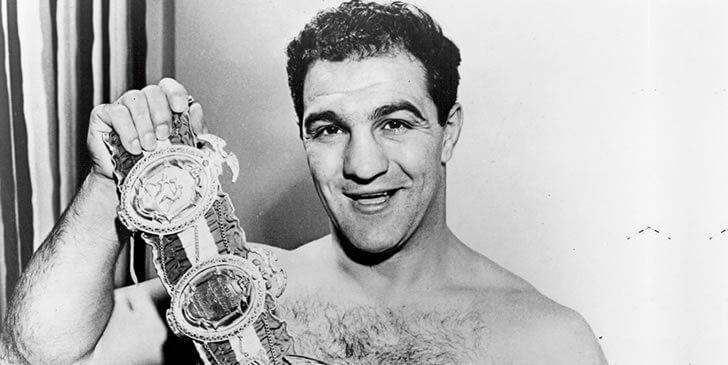 Rocco Francis Marchegiano, also named Rocky Marciano, was born in Massachusetts, the U.S., in September 1923. He was an American boxer who competed from 1947 to 1955. From 1952 to 1956, he held the world heavyweight title. Marciano is the only heavyweight champion to be undefeated during his career. His six title defense opponents were Jersey Joe Walcott, Roland La Starza, Ezzard Charles, Don Cockell, and Archie Moore. Marciano is regarded as one of the greatest heavyweight boxers of all time due to his relentless fighting style, powerful punching power, stamina, and incredibly durable chin. Here's a quiz based on Rocky Marciano.

Let's Start this Quiz
The most devastating punch Marciano could deliver was his right cross. This right cross earned a pet name for him. What was this name?
When did Marciano begin his professional boxing career?
When did Marciano announce his retirement from professional boxing?
Where was Rocky Marciano born?
In 1952, Rocky finally got his chance and won the Heavyweight Championship by knocking out what former Heavyweight Champion?
When did Rocky Marciano die?
On September 21, 1955, Rocky defended his title for the last time against which boxer?
Only one man could go the fifteen-round distance with him in all of Marciano's title defenses. Who was it?
When was Rocky Marciano born?
How many times did Marciano defend the heavyweight title before his retirement?